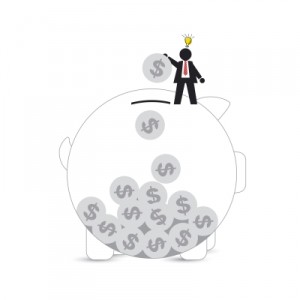 Do you make the maximum 401k contribution to your account every year?  If you don’t, you have no idea what you’re missing out on.  Saving money in your employer sponsored plan isn’t just about putting a little bit away at a time with no plan or end goal in mind.  It’s about using your time and the power of compound returns to create the most gain you possibly can.

How Much Can I Contribute?

First the basics.  Before I explain what hitting the maximum contribution can do for you, the first thing you need to know is how much you put away in your 401k each year.

In 2013, the maximum amount the IRS says you can contribute is $17,500 per year.  This is called your elective deferral to your employer’s 401k plan.  If you’re age 50 or older, you can contribute an additional catch-up contribution of $5,500.  You should be aware that the IRS usually increases this amount every few years to compensate for inflation.

Remember: That’s money that comes directly out of your paycheck before taxes are taken.  One of the rules of a 401k is that you get to defer paying regular income taxes (about 25% for most middle class people) on your investment and its growth until someday when you finally retire.

So in a way you could consider this to be a 25% bonus over what you would have normally saved simply for just participating!

How Much Money Will the Maximum 401k Contribution Result In?

Let’s look into the future.

Using the power of compound returns is where having a 401k (or any investment) can really pay off.  Over time the returns from the investment will outpace and become larger than the amount you put in.

To make an example of this, consider a few different scenarios.  Let’s take five employees:

For a period of 40 years these employees invest in the same funds and they each make an average annualized return of about 8%.  Obviously the one who contributed the most to their 401k each year will make the most amount of money.  But how more?

What happens when you consider those portfolio values against someone simply taking the same amount of money and sheepishly putting it away in a savings account that virtually pays no interest?  Some people call this as putting their money “under the mattress” referring to the days of the Great Depression when people didn’t trust businesses or banks with their money and they literally would stuff their cash under their mattresses at home.

As you can see, if you really did park your money in something as lackluster as a savings account rather than contributing to a 401k account, this would be quite a missed opportunity.

That’s part of the magic of how compound interest works.  The more you invest (especially in the beginning) and the more time you give it, the higher your 401k account could potential grow.

The Max 401k Contribution Reduces the Time to Hit Your Goal:

Investing the most you can in your 401k doesn’t necessarily have to be all about growing the biggest pile of money.  Maybe “time” is more important to you, and you’d rather retire a lot sooner than later.

Let’s run our numbers again looking at this from another angle where time is the focal point.

Suppose your goal for retirement was to hit $1,000,000.  One million dollars is a lot of money, right?  Using the 4% withdrawal rule of thumb, that would give you approximately $40,000 of passive income each year.  That’s not too bad.

So how long would it take us to build up a nest egg that large?  Again, obviously making the maximum 401k contribution each year (especially in the beginning) will result in you needing FAR less time to reach this goal than if you contributed less.  Let’s again assume five different scenarios where each employee invests exactly the same and makes approximately an 8% average return over the years.

So what is the result? 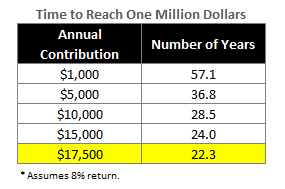 As you can tell the number of years eventually starts to reach a lower threshold of just over 22 years.  That’s a lot better than 57 years for the employee who could only sacrifice enough to spare $1,000 for their 401k each year.

One more small benefit to mention: None of these figures included the employer match that most businesses are willing to give their workers simply for participating in the plan.  So if you employer offers any kind of match, you’ll likely exceed these examples!

Plus how could you say no to free money?

If you’re smart enough to figure out a way to hit the max 401k contribution, and you still want to invest more in a tax sheltered account, then there is good news for you.   Beyond your 401k account a Roth IRA is the next best place to store your hard earned cash and grow your nest egg even faster.  The IRS maximum allowable amount in 2013 is $5,500.  The great thing about an IRA is that you do not need to go through your employer or involve them in any way to set up the account.  You can do it all yourself and invest in pretty much whatever you want.  The two of them together are a powerful way to grow your investments tax free and really prepare for a bright future.