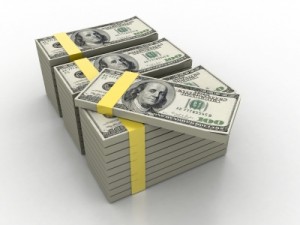 When you compare the IRA vs 401k, you’ll find that the IRA contribution limits are considerably smaller. The major factors that will affect these rates will be your income level, marital status, and age. It is also very important to be aware that the type of IRA you choose for your money may also have hidden advantages (as we’ll illustrate in the example below).

Although both the Traditional and Roth IRA allow you to contribute up to $5,500, the effects of taxes can alter how much money actually remains in your hands after all is said and done. This is called your “effective” IRA contribution limit. Consider that the amount of money you put in can be described by the following:

With a Traditional IRA, you pay your taxes later on in life. So in the year you deposit your $5,500 principal, you take $5,500 out of pocket and put it into the IRA. Eventually when you do pay taxes (let’s assume 25%) on this investment, you’ll net the following amount:

Now contrast that with a Roth IRA. With a Roth IRA, you pay your taxes now rather than later. BUT remember that you’re still allowed to contribute $5,500 to the fund. So essentially you’re really taking $6,667 dollars out of pocket, paying your taxes, and contributing the $5,500 to your Roth IRA. And as far as the law goes for now, you’ll never have to pay taxes on that money again.

This slight discrepancy in IRA contribution limits is why many advocates cheer for the Roth IRA over the Traditional. Your effective savings rate is much higher with the Roth IRA.

Although there may be some tax and fee advantages, the combination of 401k contributions by the employee and employer may lead to significantly more savings when you consider the IRA vs 401k debate.  Therefore, this makes an IRA the runner-up in terms of contributions.