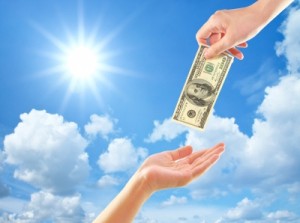 If you’ve ever thought about leaving money behind to your spouse, someone you love, or a generous cause, then you now have another reason to appreciate a Roth IRA over other types of retirement accounts.  One of the little known benefits of a Roth IRA is that you can designate it to someone after you die without having to pay estate taxes on it (so long your estate is valued under the taxable inheritance minimum).  Although that may sound like a small perk, it really can be a very important factor in your future estate planning!

Inheriting a Roth IRA?  I Thought It Was Supposed to Be For My Retirement?

Wait a minute … Why do I care about leaving this money behind to someone else?  Isn’t it supposed to be used to fund MY retirement?

Yes, that is true.  First and foremost, your Roth IRA is supposed to help fund those years in which you no longer plan to work.  However, so are many other tax-advantaged retirement accounts at your fingertips (such as your 401k, Traditional IRA, Social Security, Pension, Annuities, etc)

Suppose for a minute that you were to pass away.  The question then becomes:

The answer: The Roth IRA.

The logic behind why it is okay to will a Roth IRA to someone tax free is because technically you have already paid taxes on it (at least on the contributions). This is different from a 401k or Traditional IRA where you have not yet paid your taxes and the IRS is waiting to take their cut.

So even though there are some definite primary benefits for these accounts during retirement, your Roth IRA stands out as one that has some pretty significant secondary benefits as well if you choose to get creative with how you leave your money behind.

Leaving a Roth IRA to a Spouse:

The way the rules are written, your spouse is the best candidate for inheriting a Roth IRA. The transfer is tax free and your spouse can treat the account as if it was their own. They can combine it with their own Roth IRA and make additional contributions to it.

Similar to how it was for the original owner, there are no required minimum distributions that have to be made.

Anyone else you leave your Roth IRA to other than your spouse is called a beneficiary.

Non-spouse beneficiaries unfortunately can’t treat inherited Roth IRA’s as their own. They have to do one of the following distribution options:

1) Take out the whole amount by the end of the fifth calendar year after the year of the original owner’s death.

2) Take portions of the IRA in the form of an annuity over their life expectancy (but not later). This is also known as the “stretch option”.

For non-spouses, they have until December 31 to do this. So there is no need to rush into a decision. You’re got plenty of time to meet with a financial or legal professional if you want additional help figuring out what to do.  If there is a large sum of money at stake, then it would be wise to seek this kind of council so that a costly mistake can be avoided.

Fortunately distributions from inherited Roth IRA’s are not subject to income taxes if the original Roth IRA was established for at least five years (by the original owner) before the distribution occurs.  This can result in substantially more money left to your heirs since taxes don’t have to be paid.  What a great way to start a legacy!